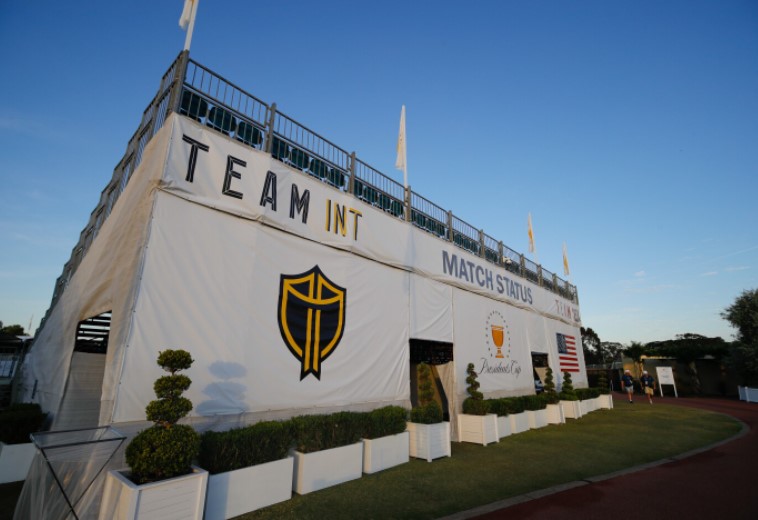 CHARLOTTE, North Carolina – The Presidents Cup and American Junior Golf Association (AJGA) today announced the final teams for the 2022 Junior Presidents Cup, with the event’s third edition set to tee off on Sept. 19 at Myers Park Country Club in Charlotte, three days before the 2022 Presidents Cup begins at nearby Quail Hollow Club. The 12th and final Junior Presidents Cup players for the U.S. Team and International Team were finalized as of Sept. 8, with Carson Kim of Yorba Linda, California and Colombia’s Juan Velasquez earning the final spots on the U.S. and International teams, respectively.

The Junior Presidents Cup is a two-day, team match-play competition featuring 24 of the world’s top junior boys 19 years old and younger – 12 from the United States and 12 from around the world, excluding Europe – that takes place just days before the start of the biennial Presidents Cup. The Junior Presidents Cup was developed to give the world’s best non-European juniors a unique playing opportunity to compete in an international team match-play competition and showcase the global reach of junior golf.

Kim, a 2023 University of Southern California commit, finished fourth in last week’s Junior PLAYERS Championship presented by Rolex to secure his debut appearance on the U.S. Team at the Junior Presidents Cup as the highest-ranked player on the Rolex AJGA Rankings who was not otherwise qualified as of Sept. 8.

Kim will bring a successful match play resume to Myers Park Country Club, having earned a 3-1-0 record in the AJGA’s Wyndham Cup in 2022.

The U.S. Team is represented by nine different states, including three players from Texas and two from California. Four players are Rolex Junior All-Americans (Jackson Koivun, Eric Lee, Ethan Gao, Aaron Pounds) while three advanced to at least the Round of 16 at the 2022 U.S. Junior Amateur (Lee, Johnnie Clark, Preston Stout).

2000 Presidents Cup participant Notah Begay III will captain the U.S. Team as they look for their third consecutive victory in the competition after lifting the cup at Plainfield Country Club (2017) and The Royal Melbourne Golf Club (2019).

On the International Team, Colombia’s Velasquez is the first player from Latin America to qualify for the Junior Presidents Cup, sitting as the highest-ranked player in the World Amateur Golf Ranking™ (WAGR) who was not otherwise qualified as of Sept. 8.

Velasquez, who hails from the city of Bucaramanga north of Bogota, won three junior tournaments in Colombia in 2022 and finished no worse than 12th in eight total events. In June, Velasquez represented Colombia as a member of the Junior National Team at the Toyota Junior Golf World Cup in Tokyo.

Nine countries are represented among the International Team, with Indonesia, South Africa and New Zealand fielding two players each; one player from Australia, China, Colombia, Malaysia, Thailand, and Trinidad and Tobago will also be represented.

Colombia, Malaysia, Trinidad and Tobago are represented in the Junior Presidents Cup for the first time.

Three-time Presidents Cup participant Tim Clark (2003, 2005, 2009) will captain the International Team as they seek their first victory in the Junior Presidents Cup.

The 12-player teams for the 2022 Junior Presidents Cup are listed below: