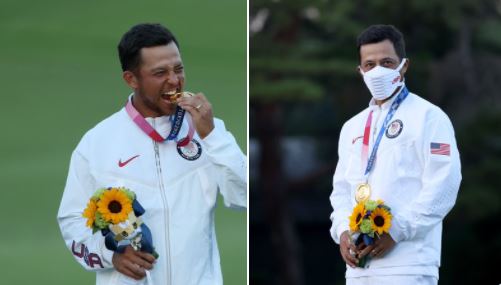 In the final round of the 2021 Olympic Men’s Golf Competition, Xander Schauffele carded a 4-under 67 to get to 18-under for the tournament, one clear of the field to claim the gold medal for the United States.

KAWAGOE, Japan – The COVID-19 pandemic has forced the athletes’ families to watch these Olympics from afar. They’ve shared victory through a screen, their tears separated by thousands of miles.

Not the Schauffeles. Xander and Stefan Schauffele were able to embrace as Xander walked off the 18th green, moments after holing a 5-foot par putt to seal a one-shot victory in the Olympic men’s golf competition.

Xander’s gold-medal performance was his first victory in 2 1/2 years, and he did it after taking a one-shot lead over the host nation’s favorite son, Hideki Matsuyama, into the final round. The victory, which took place in the country his mother called home as a child, also fulfilled a family’s athletic dream that was deferred by a drunk driver.

As the only swing coach Xander has ever known, Stefan was able to attend these Olympics. He often walks several hundred yards ahead of his son, using a monocle to get a closer view of the swing that he helped mold. Stefan is not an anxious observer, even as his son clung to a one-shot lead on the final hole. The imposing figure nicknamed Ogre couldn’t hold back the tears after Xander’s win was complete, however.

“I did think of him as soon as I made the putt,” Xander said. “I knew he was going to be there crying.”

The Schauffeles’ story is truly an American tale. Xander is the son of a French-German father and a mother who was born in Chinese Taipei before being raised in Japan. Xander’s maternal grandparents live in Tokyo.

They married three months after their first meeting.

Stefan had moved to the United States after his dreams of being an Olympic decathlete ended when that drunk driver slammed into his car.

The Schauffeles’ sporting success extends even farther, however. Xander’s great-grandfather, Richard Schauffele, was one of Germany’s top discus and javelin throwers, but a shoulder injury kept him out of the 1936 Olympics.

Xander didn’t inherit the height of his father’s side, even though childhood measurements predicted he would grow to 6-foot-5. “Thank goodness my wife’s genes kicked in,” Stefan said.

But Stefan made sure to pass along the mental toughness he learned from decathlon. Stefan taught his son breathing and concentration techniques he learned during his own athletic career. He was strict, but a deep bond was still created between father and son.

“For this to come full circle, … I just feel very fortunate and really happy to share this with him.”

Xander started playing golf at age 9, when he was strong enough to carry his bag for 18 holes. He wasn’t allowed to use tees in those early junior tournaments on par-3 courses. Stefan knew that the temporary disadvantage would pay off later.

“That’s been engraved in him forever, to be tough,” said his caddie and former college teammate, Austin Kaiser. “His attitude is huge. … He doesn’t want it to be sugar-coated.”

Xander needed that fortitude on the final four holes at Kasumigaseki Country Club. His lead was gone after a bogey on the reachable par-5 14th, where he pushed his drive into an unplayable lie. Schauffele had to make a 5-foot putt for bogey. He parred the next two holes before making an 8-foot birdie putt on the short par-4 17th.

Holding a one-shot lead, he drove into the trees right of the 18th fairway. After laying up on the long par-4, Xander hit his 90-yard wedge shot to 5 feet. He sank the putt to win the gold medal.

Xander adds the Olympics to his four PGA TOUR titles. The most recent of his wins, the Sentry Tournament of Champions, came in January 2019, however. He’s held the 54-hole lead four times in his TOUR career but never won after entering the final round with the lead.

While many golfers reveled in the Olympic experience, enduring a longer commute in exchange for the opportunity to hang out with their fellow Olympians, the Schauffeles stayed separate from Team USA in a hotel closer to the course. There was still one logistical snag – a lightning strike on the eve of the first round knocked out power, cutting the air conditioning – but Stefan said the decision was key to Xander’s success. It also illustrates the family’s single-mindedness.

“I had to fight to get a hotel near (the course),” Stefan said. “That gave him an enormous comfort level.”

So did being in Tokyo, a city he’s visited several times to see his grandparents. The Schauffeles’ international heritage extends past this year’s Games, as well.

“The next Olympics are in Paris,” Stefan said with a wink, “and I have family there, too.”