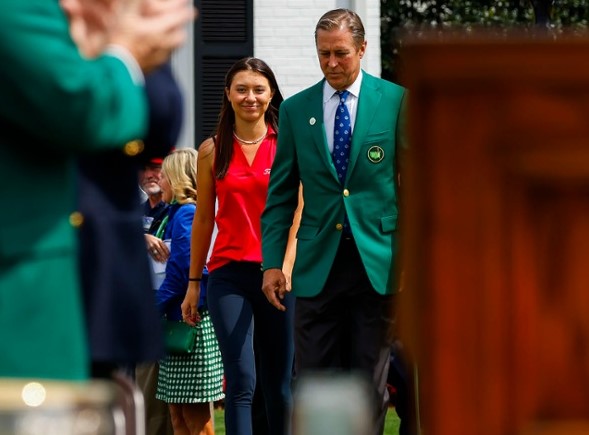 Davis Stunned by Win at Augusta

Wearing a bucket hat reminiscent of a youthful Jack Nicklaus, 16-year-old Anna Davis on Saturday joined the Golden Bear and so many other legendary golfers in the annals of champions at Augusta National.

Davis, a high school sophomore from Spring Valley, Calif., shot a three-under 69 to win the third Augusta National Women’s Amateur by one stroke with a 54-hole total of one under par. Ingrid Lindblad of Sweden and Latanna Stone, teammates at Louisiana State University, tied for runner-up 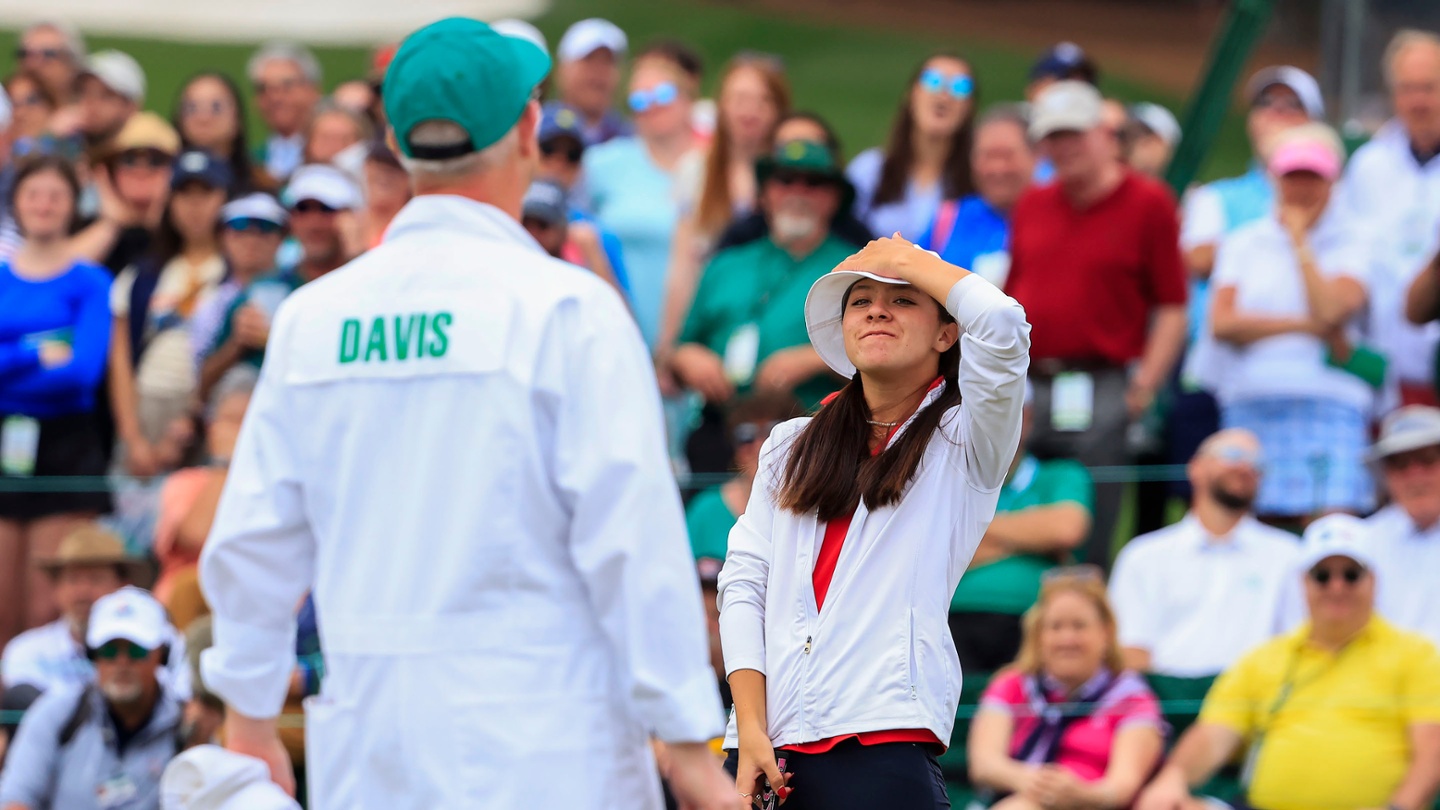 Anna Davis reacts to a putt on the No. 18 green during the final round.
Kelly Gavin/Augusta National 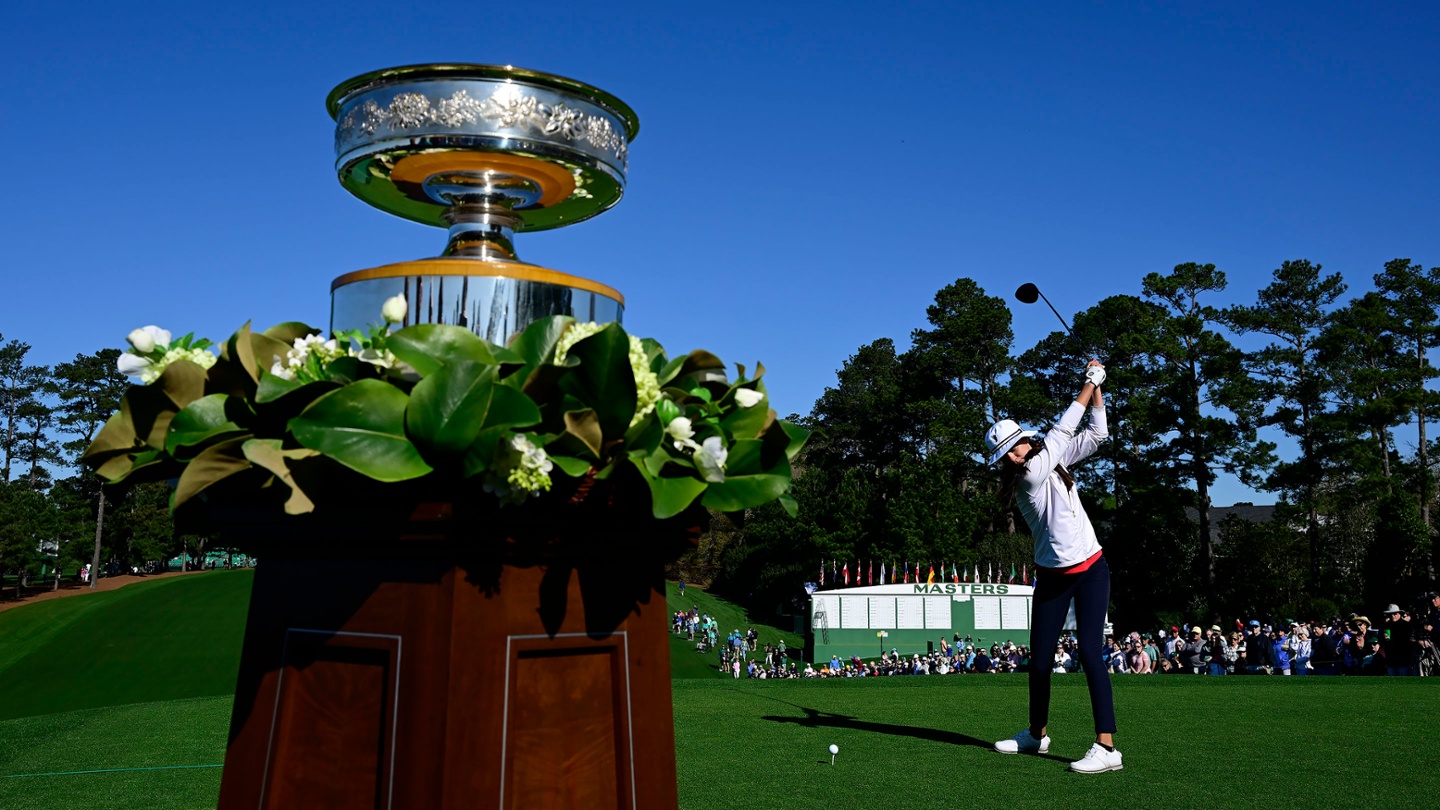 Anna Davis during the final round.
Charles Laberge/Augusta National 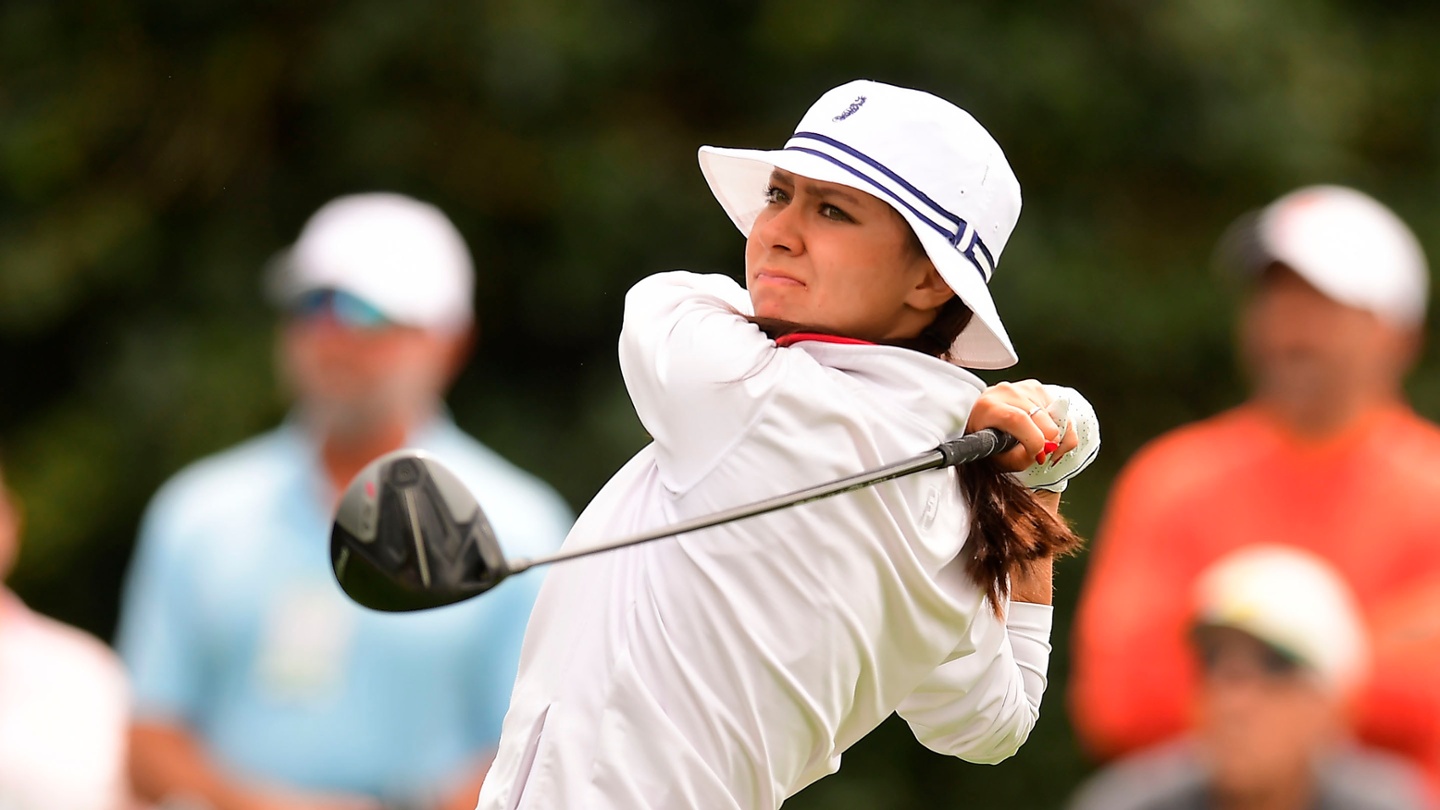 Anna Davis plays from No. 18 tee during the final round.
Shanna Lockwood/Augusta National 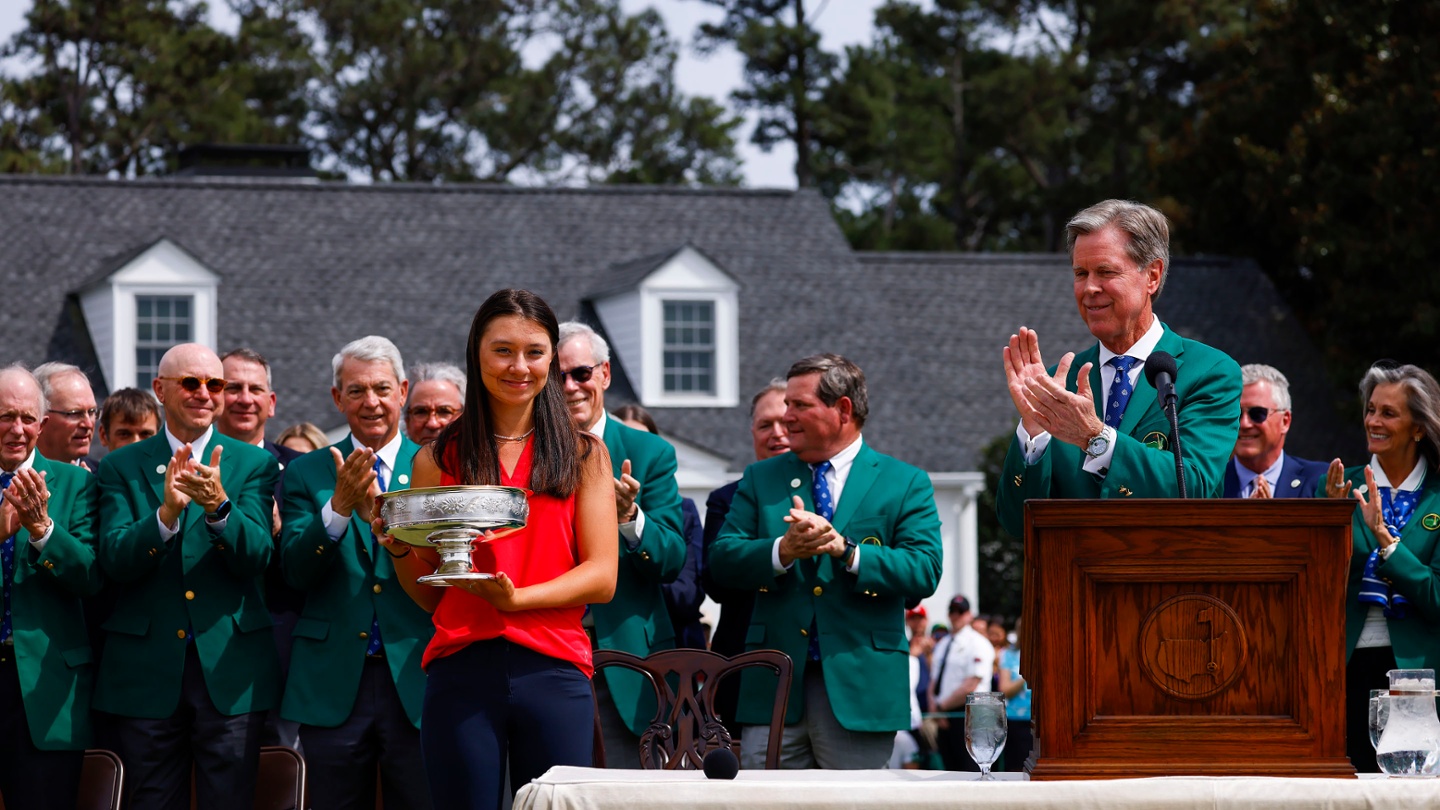 Anna Davis is presented with the trophy following her victory.
Chris Trotman/Augusta National 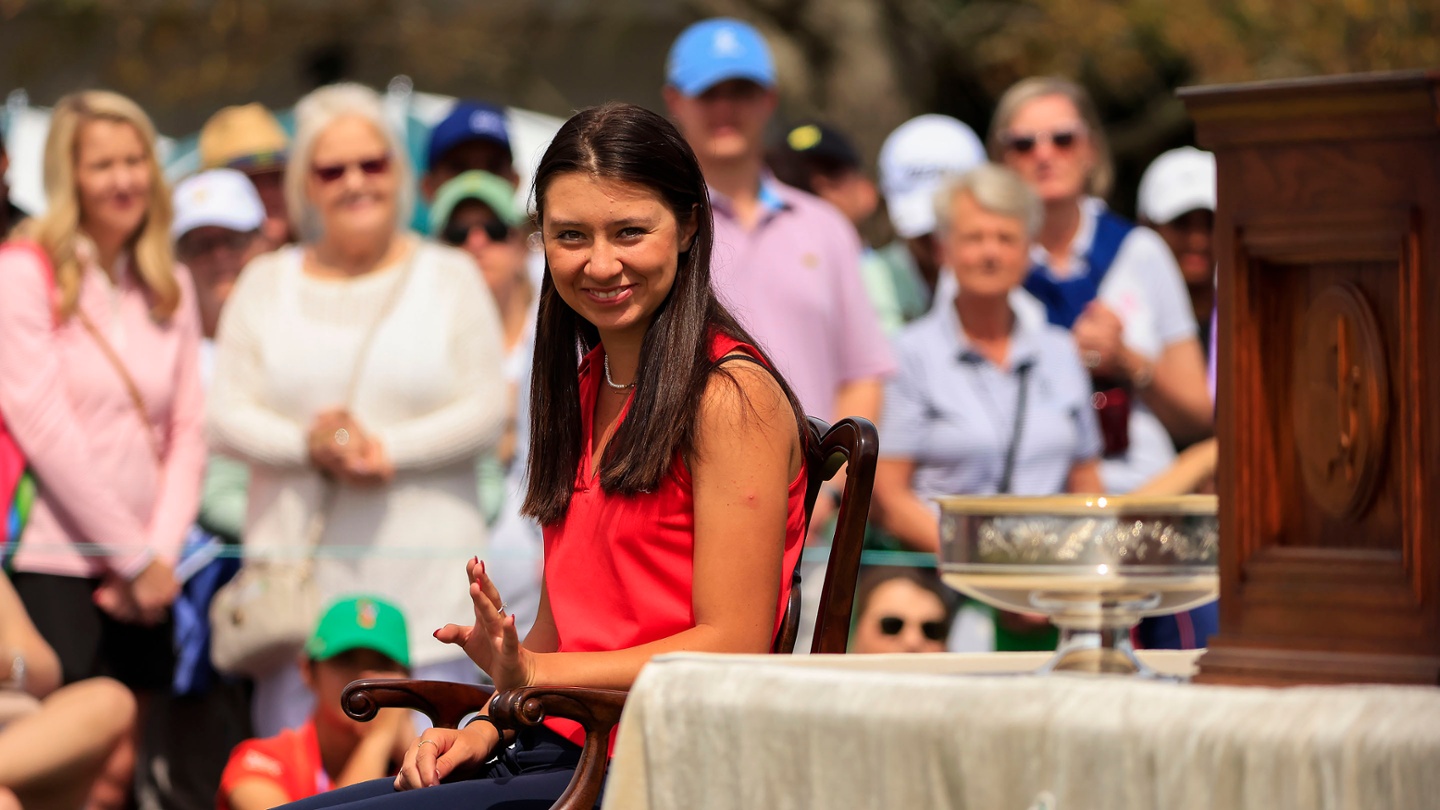 Anna Davis is presented with the trophy following her victory.
Kelly Gavin/Augusta National

Starting the day two strokes off the lead and playing with a composure that belied her years, Davis offset a lone bogey at No. 3 with four birdies, including two in a row at Amen Corner, at the par-3 12th and the par-5 13th. She was one of 50 first-timers in the field of 72 players and had never stepped foot on Augusta National until playing a practice round Friday. What’s more, she said, she had barely watched the Masters on television other than seeing Tiger Woods putt out for victory in 2019.

After the first two rounds of the Augusta National Women’s Amateur, which were played at nearby Champions Retreat Golf Club on Wednesday and Thursday, the leader board was tightly bunched. Only six strokes separated the 30 players who made the 36-hole cut to earn the privilege of competing in the final round at the home of the Masters.

Both Lindblad and Stone made charges up the leader board on Saturday. Playing ahead of Davis and Stone, the long-hitting Lindblad eagled the par-5 8th and the par-5 15th holes to reach one-under par and hold the lead. But after pars on Nos. 16 and 17, she drove into the fairway bunker on 18 and made a bogey. She shot the low round of the day, a four-under 68. 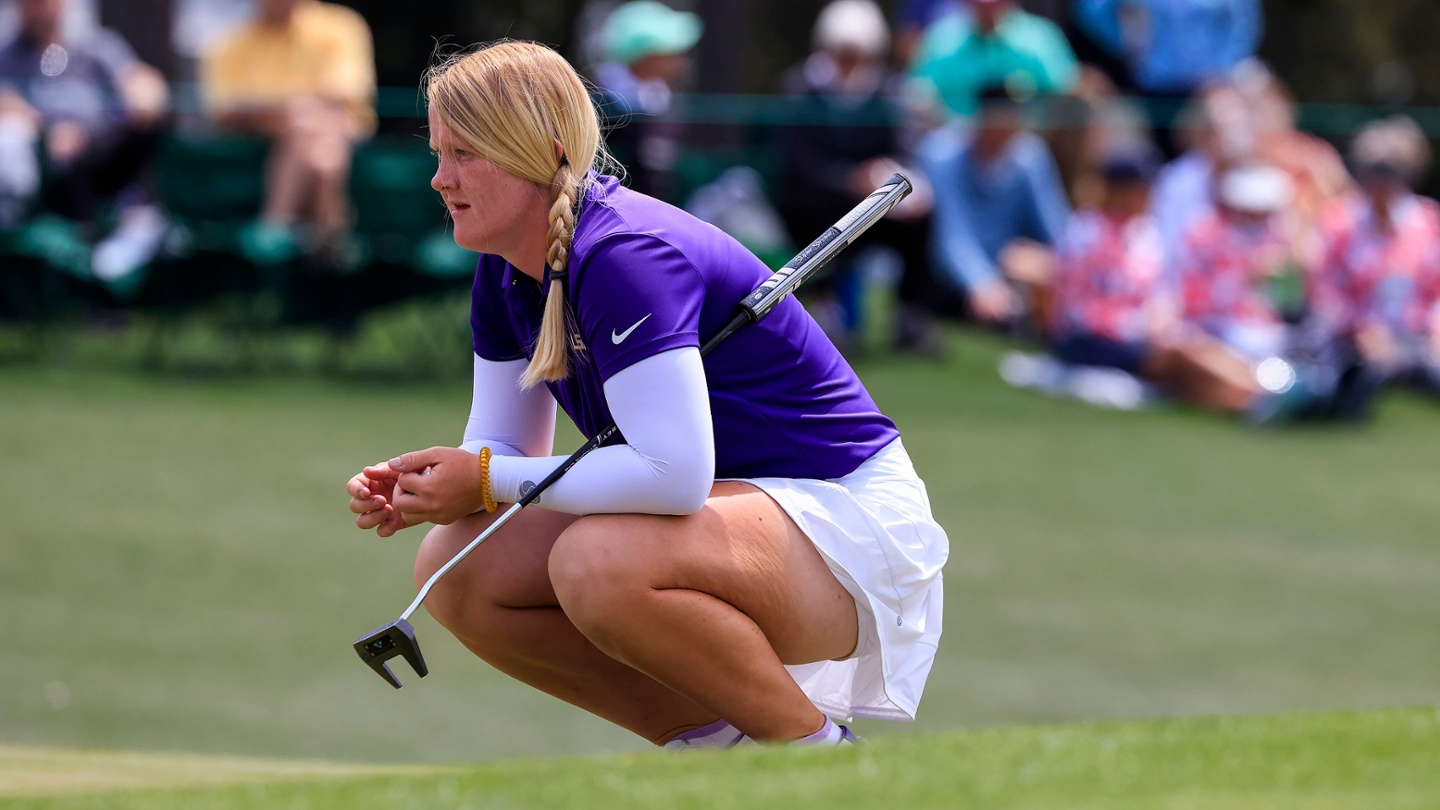 Ingrid Lindblad of Sweden lines up a putt on No. 18 green during the final round of the 2022 Augusta National Women’s Amateur.
Kelly Gavin/Augusta National 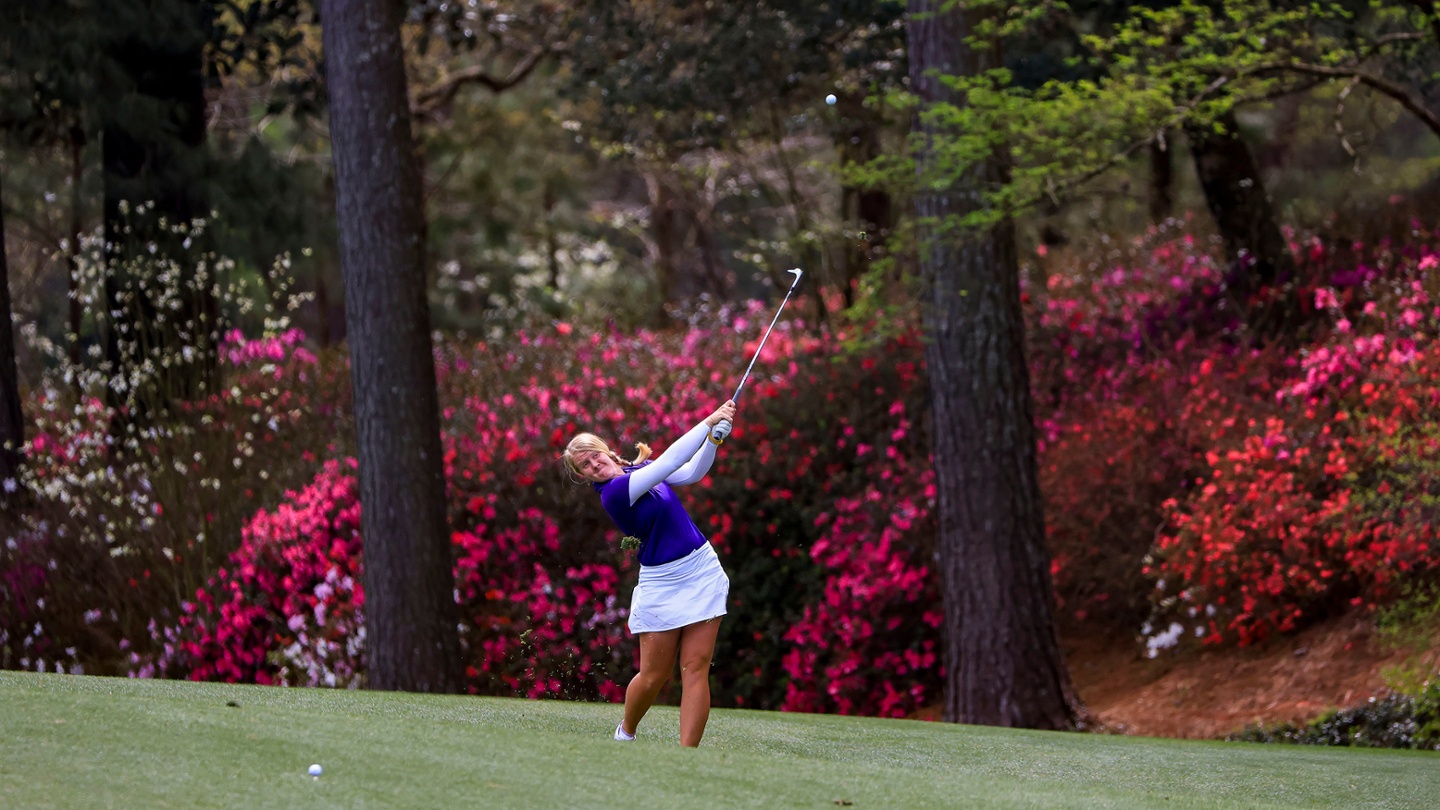 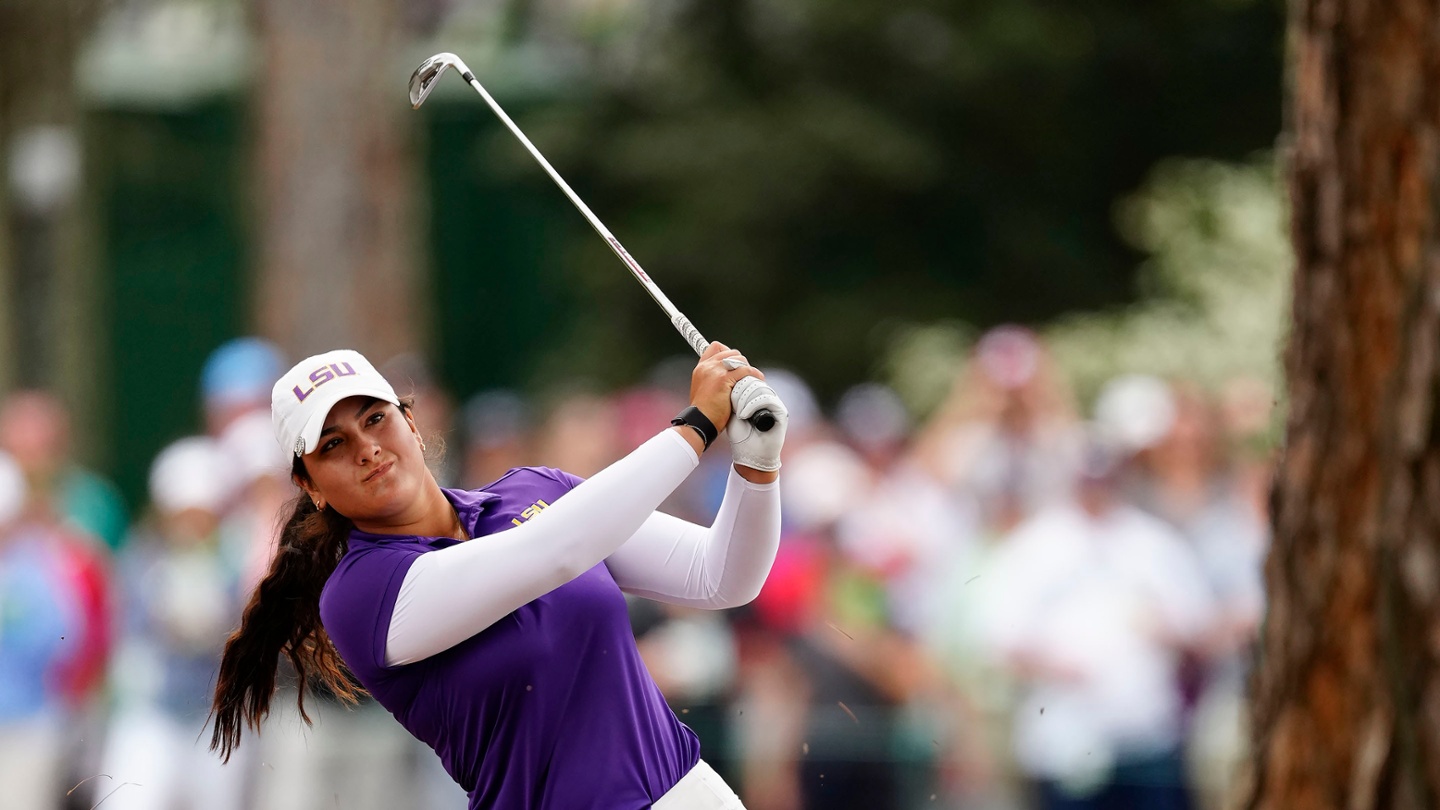 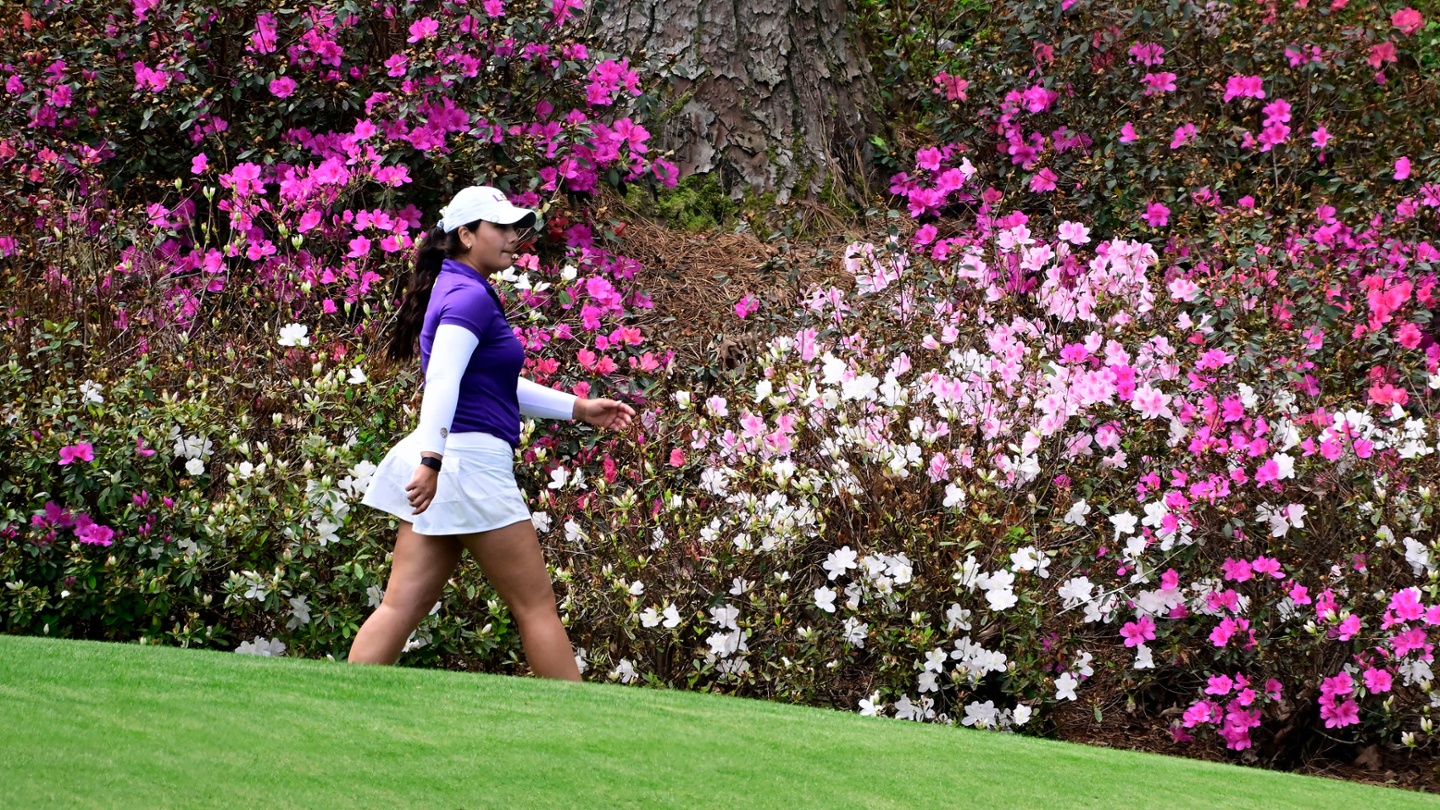 Latanna Stone walks from No. 13 after her drive during the final round.
Charles Laberge/Augusta National

Stone, who was in playing in the final pairing, birdied Nos. 12 and 13 to go to two under par. When she added another birdie at the par-3 16th, feeding her tee shot down a slope to within 5 feet of the hole, she held a two-shot lead.

On the 17th tee, her mother, Yuen Stone, squeezed her way through the patrons to offer words of encouragement to Latanna. “Su su!” she said, reciting a fighting cheer from her native Thai language.

Stone’s time atop the leader board proved fleeting, however. After a fine drive up the right side of the hole, she hit a pitching wedge from 130 yards over the green, then chipped on and three-putted for a double bogey. Now she and Davis were tied at minus-one. Stone’s problems continued on 18. She drove into the trees on the right side and, after punching out to in front of the green, failed to get up and down for par.

At that point, Davis, who had been following the play on a monitor indoors, realized she had won. “I wasn’t expecting it,” she said, “but I was more nervous watching her than playing my round out there.”

I’ve never experienced quite a large crowd like that, and I’m going to cherish it forever.

Stone described her finish as “heartbreaking.” She said she knew she was leading by two on the 17th hole and was just trying to safely par her way in. Speaking of her approach shot at 17, she said, “I was trying to be aggressive and just kind of lost it. I thought I could get it back on 18, but I had a lot going on in my head with where I was at.”

But, echoing a sentiment voiced by players all week, particularly on Saturday at Augusta National, Stone said the support she received from the patrons lining the holes was tremendous and, in her case at the end of her round, quite comforting.

“I’m really overwhelmed,” she said. “I wasn’t expecting that. That really kind of brought me to tears. I’ve never experienced quite a large crowd like that, and I’m going to cherish it forever.”

With her victory, Davis joins a short but distinguished list of champions of the Augusta National Women’s Amateur. In the inaugural event in 2019, Jennifer Kupcho outdueled Maria Fassi of Mexico. The two women knew each other from the collegiate and amateur golf circuits, Kupcho as a student at Wake Forest and Fassi at Arkansas.

Playing through a migraine in the final round, Kupcho powered her way to a four-stroke victory, highlighted by her hitting the green in two at the par-5 13th and one-putting for eagle. The site of the two smiling, pony-tailed women (both now members of the LPGA Tour) fist-bumping as they walked the fairways has become an iconic image from Augusta National. 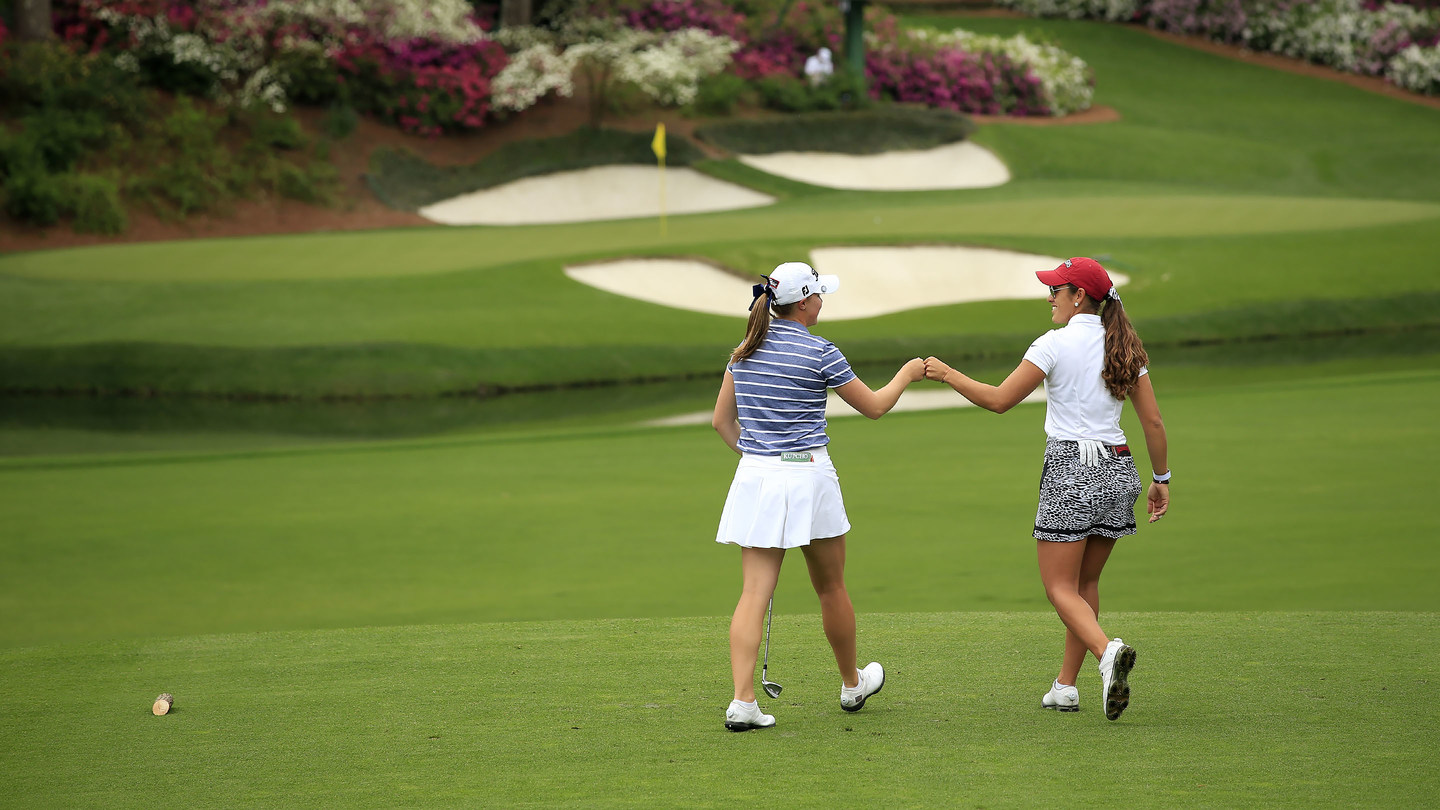 Jennifer Kupcho and Maria Fassi fist bump at No. 12 during the final round of the 2019 Augusta National Women’s Amateur.

After a one-year hiatus due to the pandemic, the tournament resumed in 2021, with a number of returning players and a host of eager first timers. After 54 holes, Emilia Migliaccio of Wake Forest and Tsubasa Kajitani of Japan were tied at one over par. The 17-year-old Kajitani, who entered the final round trailing by five shots, won on the first hole of sudden death. Eight days later, inspired the victory of his countrywoman, Hideki Matsuyama became the first Japanese player to win the Masters.

During a post-round press conference Saturday, Davis learned that her victory had earned her a berth in this year’s United States Women’s Open. For all her older-than-her-years composure, she reacted to the news as a 16-year-old might. “That’s insane,” she said. “I did not know that. I was looking forward to a qualifier in that soon, but that’s incredible.”

As for her old-school bucket hat, a fashion adopted by a fan club of her family members on Saturday, Davis said she began wearing one at the Girls Junior PGA Championship at Valhalla Golf Club in Louisville, Ky., last year. Her father told her she was getting sunburned on her nose and suggested the wide-brimmed hat. She took his advice and ended up winning by seven strokes, earning her invitation to the Augusta National Women’s Amateur.

“Ever since,” she said, “that’s kind of become a thing, I guess. I try to wear it at least once a tournament just to please everybody.”