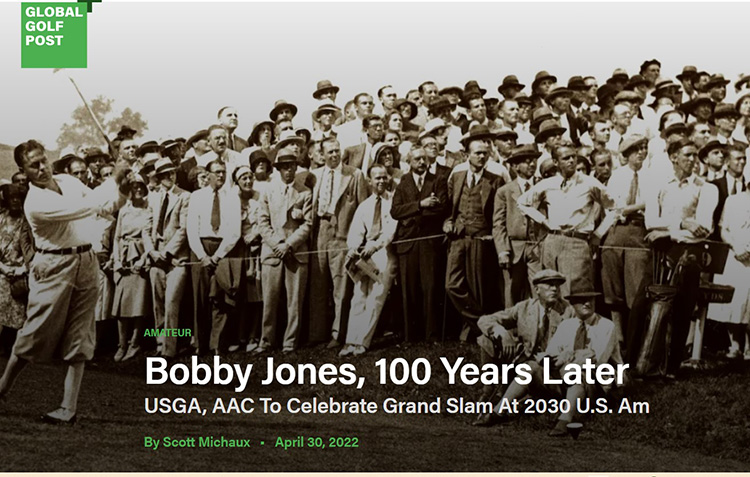 OHNS CREEK, GEORGIA | The spirit of Bobby Jones oozes from every corner of the Atlanta Athletic Club. Its address is Bobby Jones Drive. A statue of golf’s greatest amateur stands in front of the English manor clubhouse. The largest collection of Jones memorabilia anywhere is housed in the museum inside. Of the three Georgia golf shrines to its native son – Jones’ legend was born at AAC’s original East Lake golf venue and his legacy was built across the state at Augusta National – the club where he once presided as president and maintained a lifelong membership until his death in 1971 is where Jones’ love and devotion to the game and its amateur practitioners most actively resides.

Fittingly, it is also where the culmination of Jones’ greatest competitive achievement – the 1930 Grand Slam clincher in the U.S. Amateur – will celebrate its centennial.

The Atlanta Athletic Club will play host to the 2030 U.S. Amateur Championship on the 100th anniversary of Jones’ final competitive victory that capped his Grand Slam season in 1930. That event will take place in the month after the 2030 U.S. Open is held at Merion Golf Club, where Jones won the last leg by beating Eugene Homans, 8 and 7, in the 36-hole U.S. Amateur final. He returned to Atlanta with the trophy and promptly retired from competitive golf at age 28.

“For me personally to know that the centennial of the Grand Slam is coming to my grandfather’s home club in my hometown, it’s almost moving beyond words,” said Bob Jones IV, the grandson of Robert Tyre Jones Jr. and a member of the Atlanta Athletic Club. “We have an opportunity for us as a club and us as a family to, over the next seven or eight years, retell the Bobby Jones story for a new generation and get people to see him more in living color than just simply as a sepia photograph. We’re very excited about it.”

“I don’t think there can be anything bigger than that,” said Kevin Costello, the AAC president, of getting to celebrate Jones’ centennial victory at his home club. “He’s the most famous member of our club and the best amateur of all time. To be able to commemorate the 100th anniversary of his slam with the Amateur, there’s nothing that could have been better for us.”

The announcement this week at AAC went deeper than that centennial event. The club reinforced its commitment to the USGA as well as amateur and women’s golf by agreeing to play host to the U.S. Girls’ Junior Amateur in 2025 and the U.S. Women’s Amateur in 2035. When the junior girls play there in two years – the USGA hasn’t yet determined whether it will use the newly Tripp Davis-redesigned Riverside course or the tried-and-true Highlands – Atlanta Athletic will edge out Oakland Hills in becoming the first club to play host to the USGA amateur boys (2002) and men (2014), amateur girls (2025) and women (1950) and both the men’s (1976) and women’s (1990) U.S. Open championships.

That egalitarian support regarding gender and age is a prominent club feature. Not only does it revere and celebrate its female champions – a roll that includes USGA champions Alexa Stirling Fraser, Louise Suggs, Dot Kirby and Martha Kirouac – but it champions a robust junior program that currently includes 325 kids of all ages and skill levels. It hopes to inspire more of them to qualify for these events and join AAC’s long history of accomplished amateur competitors.

“It’s very exciting for the Girls Junior because of the great investment the club has made in junior golf,” said Kirouac, the 1970 U.S. Women’s Amateur champion who has long called AAC home. “That indicates quite a commitment on behalf of the club and the wonderful relationship we have with the USGA. Both are near and dear to my heart.”

AAC had already been the host facility to six USGA events in the last 72 years, going back to the 1950 Women’s Amateur held at East Lake. After the club moved to its current home adjacent to the Chattahoochee River in Johns Creek, it played host to the 1976 U.S. Open won by Jerry Pate and the 1990 U.S. Women’s Open won by Betsy King. Its most recent USGA event was the 2014 U.S. Amateur win by long-shot Gunn Yang over Corey Conners in the final of a field that included eventual U.S. Open champions Jon Rahm and Bryson DeChambeau.

The Highlands course also was the site of the 1984 U.S. Mid-Amateur, won by club member Michael Podolak after fellow club member Danny Yates was co-medalist. It was the club and the Georgia State Golf Association who donated the ornate, three-handled sterling silver Robert T. Jones Jr. Memorial Trophy upon the inaugural U.S. Mid-Amateur championship in 1981. The trophy had been permanently given to Jones in 1920 after he’d won three consecutive junior tournaments at East Lake for which the Davis & Freeman trophy had been originally presented since 1909.

The club’s mission statement boasts its “reputation for championship golf,” and that core value in its DNA has helped it manage to maintain equal-opportunity relations with the two most important domestic governing bodies – the USGA and the PGA of America. The 1963 Ryder Cup was played at East Lake, the PGA Championship was won by David Toms (2001) and Keegan Bradley (2011) on the Highlands course and the most recent major played there was the 2021 KPMG Women’s PGA Championship won by Nelly Korda.

“The Atlanta Athletic Club is proud to continue its tradition of hosting national championships,” said Costello. “Building on our enduring relationship with the USGA, it’s an honor to showcase our golf courses to the world and play host to these prestigious championships that truly embody the spirit of the amateur game and support the next generation of golfers.”

When West Streib, the AAC member, made the initial reach to the USGA a couple of years ago about bringing more championships to the club, it wasn’t a hard sell.

“The club wanted to deepen its legacy with the USGA,” said Mark Hill, the USGA’s senior managing director, championships. “When a club the stature of Atlanta Athletic Club raises its hand, it sends a powerful message.”

While Streib’s initial conversations with the USGA were about the Girls’ Junior Amateur in 2025, the door was suddenly open to broader opportunities. The USGA had already announced the 2030 U.S. Open and Women’s Open would be played at Merion and Interlachen, respectively, the two courses where Jones won the U.S. half of his Grand Slam. The Amateur that year was still homeless.

“The ’30 Amateur flowed from that, and absolutely we had Bob Jones in mind,” said Hill. “It was very intentional on our part. There are deep connections here. We’re honored that the club agreed to do it. It’s a nice opportunity to celebrate Jones.”

With two championship courses on one compact footprint, AAC is a big attraction for events with massive 312-player fields like the men’s and women’s Amateurs. The Riverside course, which in addition to getting spruced up is undergoing some significant routing tweaks by Tripp Davis to better utilize the features of property, will handle half of the medal play while the match-play bracket is played on the Highlands, which was last renovated for a third time by Rees Jones in 2016. The USGA toured the Riverside course on Tuesday to give it serious consideration to handling the U.S. Girls’ Junior by itself.

While that Junior Girls event will be here before you know it, the countdown celebration for Jones’ centennials has already begun. Next year, there will be a centennial event for the first of Jones’ 13 major victories, in the 1923 U.S. Open at Inwood Country Club in New York. The other courses where Jones won majors include St. Andrews, Hoylake, Royal Lytham & St. Annes, Oakmont, Winged Foot, Scioto, Minikahda and Brae Burn.

“We want to be involved with the clubs that were part of the whole series (of majors) leading up to 2030,” said Jones IV, noting that the celebrations will include fundraising for the Bobby Jones Chiari & Syringomyelia Foundation while retelling the story of his grandfather’s remarkable life and career. “This window now between 2023 and 2030, we feel like it is an unparalleled opportunity to do that.”

That it will all conclude at the club Jones called home will wrap it up beautifully.

“It really was a perfect fit,” said Streib. “We were going to celebrate it no matter what with a big gala. But when you get to have one of the four championships which he won 100 years earlier, it’s just perfect.”