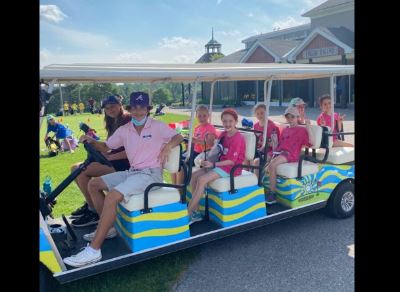 Learning to golf can lead to much more than just proper technique — the sport also fosters essential life skills like patience, confidence, and self-discipline, according to one local golf instructor.

“I think that golf is a huge teacher on its own. I think it’s great for showing kids the importance of setting different goals and how they are able to kind of control their emotions. Really all the life skills that you’re not going to get from playing a video game or some of the other activities that kids these days are doing,” said golf instructor Carly Peister.

Peister has been teaching golf since 2015, when she first launched her program, which offers summer camps, as well as private and group lessons for adults and children.

In that first year, she had just 34 kids in summer camp and 10 in lessons. Since then, it has seen significant growth: today she has 232 summer camp students, 25 junior members, 65 in the junior league, and another 250 in private and group lessons.

“It has grown dramatically. It originally started with me doing it all on my own with just six or seven campers and myself. And now it’s grown to having five or six staff on board with me as well as up to 10 to 15 high school volunteers that are getting their community service hours so that we can accommodate more kids,” she said.

Although she teaches both kids and adults, the majority of her clients are children, who she says inspire her and make it “enjoyable to come up with new ways of teaching.”

“It’s important to spend the right time with kids and help them develop the right habits at such a young age, so that they can pursue the game and be successful at the game down the road,” she said.

Peister herself started playing when she was about eight-years-old, although she didn’t fall in love with the sport until she was in high school and started meeting other girls her age who played.

“When I started as a young player, there were no girls programs,” she said, adding that existing programs were very male-dominated.

“So once I kind of was exposed to the sport, and met other girls that played, it definitely became more enjoyable.”

After that, it started to be something that she could do with her family as well, as her dad was always an avid golfer and taught her how to play.

“He always instilled in me to have fun and not put too much pressure on yourself while you’re playing,” she said. This philosophy is largely what her lessons centre around today.

“I make sure that it’s not just about the fundamentals of golf, but that it’s about enjoying the sport and learning about how you can play it for your whole life,” she said. “I think that’s one of the things that’s really great about golf, because it’s pretty low risk for injuries. You can play it your entire life.”

To really take the pressure off of learning and make it fun for children who are new to the sport, she employs a lot of game-based learning activities.

“With the little ones, one of their favourites is when I set up a bunch of different dinosaurs and animals on the putting green. It just changes the concept from putting into a hole to making a game out of it, like let’s put all the animals back in the zoo,” she said.

Through these games, they learn how to aim and hit the correct weight of a putt without focusing on whether or not they get it into the hole, shifting the focus instead to learning while having fun.

“I think it’s the best way to keep the kids engaged, and not let them get down on themselves. And I find with golf, because it is a challenging sport and it’s very technical, if kids don’t succeed very quickly, they want to give up,” she said. “So when you change it into more of a game-based style of learning, it keeps them engaged, and it keeps them wanting to come back and do better at the game.”

Peister’s young students often come back later to volunteer with her summer camps; she’s even hired a few of them.

For the youngest age group, she has a little tykes program for three to five-year-olds. But she says the majority of youth she teaches are around six to nine.

While Peister says the program has seen growth over the pandemic because parents feel it’s a safe, no-contact activity, she says she has also been working hard over the last six years to continue to bring more clients in.

Last year, Peister was the only Canadian to win a U.S. Kids Golf Coach award for being one of the top 50 golf coaches.

Lessons are typically one hour in length and tend to focus on full swing putting, chipping, or bunker shots. Usually there will be about six students to one teacher, meaning they get lots of one-on-one instruction.

For the lessons, she follows an achievement program called the U.S. Kids Golf Player Pathway Program, where kids are awarded with pins each time they learn something.

She says the program helps them focus on what they want to accomplish during a lesson, what skill they really want to hone that day.

The summer camps Peister offers are similar to the lessons but run about half a day and accommodate more kids broken up into smaller groups. While the focus of the summer camp is to learn golf, campers will learn mostly through golf-inspired games.

“I always appreciate when parents trust in me to work with their kids,” she said. “And a lot of the kids that I’ve worked with for years, we’ve really developed good relationships, and it really is a special feeling to have them be part of my life. Every one of my clients kind of holds a special place in my heart.”

You can learn more about Peister’s program here,