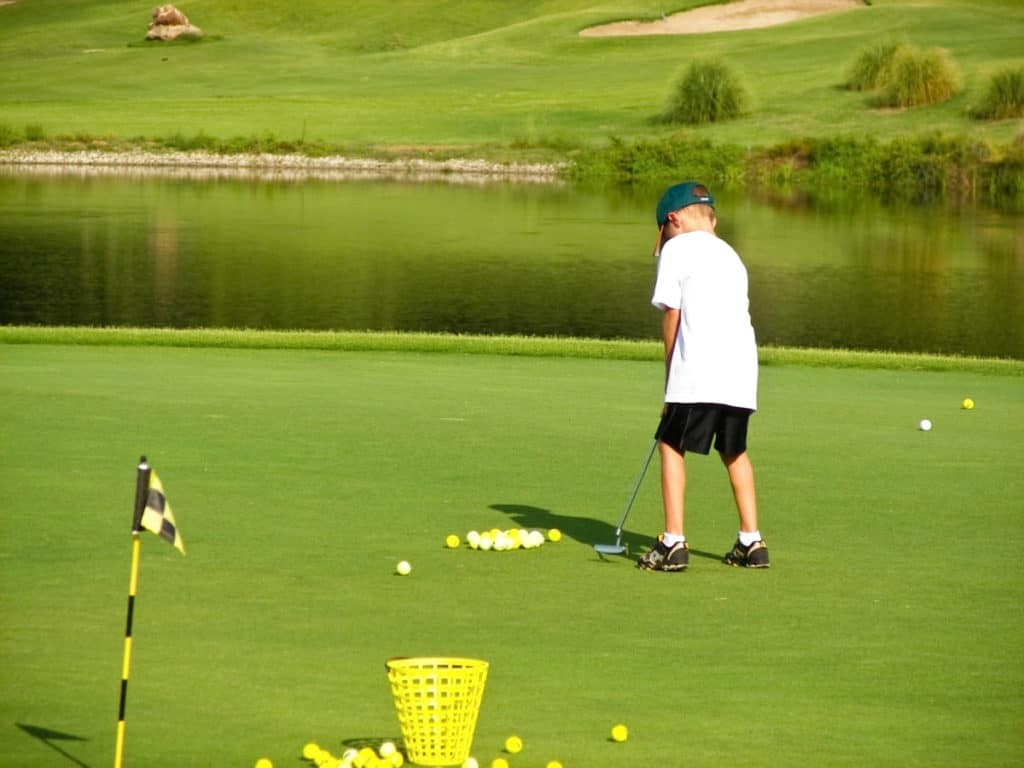 My main goal in coaching the mental game is to help people learn how to work with the thoughts and feelings that interfere with making a free swing or putting stroke. Synchronizing mind and body isn’t possible if we have not stabilized and channeled our emotions. We at Zen Golf like to say, “You can’t hit it straight if you’re bent out of shape.”

Junior golfers are especially vulnerable to being overwhelmed by intense feelings, because most haven’t yet fully developed the emotional maturity to regulate them. This is where the guidance of more emotionally mature adults in a young athlete’s life comes into play.

Developing healthy emotional coping skills in children depends on the quality of the relationship parents or coaches establish with the junior golfer. Healthy relationships rely on the ability of influential adults to help young athletes feel accepted, understood, safe, and valued.

Sam, a very talented 13-year-old junior golfer, was referred to me by his parents because he could not manage his anger and frustration in competition and during practice sessions. Sam’s struggle hindered his overall development as a player. Besides inconsistent scoring in tournaments, his behavior on the course alienated him from other players. To complicate matters, Sam’s heightened sensitivity to criticism from his fellow players and their parents left him ashamed and confused. He was at a loss for how to improve his behavior, making him feel helpless.

My work with Sam began by playing nine holes with him. Sam reacted negatively to many of his shots, including his good ones. On one hole, he hit a 30-yard pitch shot within a few inches of the hole and dropped his club to the ground in frustration when it did not go in. Following the round, I gave Sam and his father a brief explanation of how the brain’s rational and emotional parts communicate with each other. I also told them how the body is affected when strong negative emotions overpower logic. We talked about the thoughts, physical sensations, and behaviors connected to these feelings, and how they interfere with shot-making.

Sam experienced his emotions in a flash. There was no gradual build-up of feelings, just a flood of emotion that would suddenly overwhelm him. This would turn into impulsive, alienating behaviors. His flash of emotion left no room for him to reflect on the outcome of his shot. There was virtually no time gap between his shot (trigger) and his feelings (reaction to the shot). I shared this observation with Sam and explained the need to create a space of awareness between trigger and reaction. Sam and I reviewed different emotions and rated their level of intensity in different situations. We then discussed tools for calming the emotional part of his brain when it was triggered. Sam understood that his goal was to reduce intensity before hitting his next shot.

During our next playing lesson, I instructed Sam to label his feelings and rate their intensity following each shot. This exercise required Sam to observe and describe each of his feelings. By doing so, we created an awareness space. Once he was able to identify his feelings, we shifted our focus to grounding strategies that he could use as he walked to his ball in preparation for his next shot.

Grounding strategies make use of sensory information to calm us down. When we consciously shift our focus to sensory input, it helps to settle the emotional brain. A player can focus on what he sees, hears, smells, tastes, or feels. Sam chose to use his sense of touch to settle his emotions. After hitting a shot, labeling his feelings and rating their intensity, Sam would shift his focus to walking to his next shot, carefully noticing his feet landing and pushing off the ground with each step. By being mindful and aware of his steps, Sam could get relief from his strong emotions, allowing him to focus on his next shot.

Soon Sam could better regulate his emotions and manage his behavior, allowing him to focus on process over outcome. By doing this, he improved both his demeanor on the golf course and his scoring. These are strategies you use to help your young golfer.

One of the keys to teaching emotional regulation is awareness of the weight put on performance outcomes. It is important to understand that our culture programs children to focus on results over process. Our education system values grades over learning, and athletics emphasizes wins or scores over skills development. This resultsoriented focus leads to unrealistic expectations of young people and creates stress and anxiety. These interfere with emotional growth, character development, and performance.

In my experience, athletes respond better to a process-oriented mindset than a resultsoriented mindset. This is especially the case when they understand how attending to a process can improve results. For example, having a junior golfer rate their success with fully executing their swing routine on each shot for nine holes reinforces the focus on process over results. The player’s increased awareness of and attention to proper preparation usually translates into lower scores.

Youngsters and adults need to know how emotions work, what triggers them, and what to do when emotions are activated. Essential to this process is helping young athletes learn to relate to their feelings differently. Rather than intolerance and denial, an attitude of acceptance and curiosity helps to reduce the intensity of feelings. In addition, they may need help describing their overwhelming feelings in words. It has been found that when we name our strong emotions they naturally settle down.

One goal of this approach is to deal proactively with potential challenges rather than reacting to them after the problem has occurred. Adults working with young athletes can help foster the self-awareness needed to identify emotional triggers during practice for competition. They can then plan for strategies to use in competition when difficult emotions arise. Coaches and parents must also be willing to work collaboratively with the young athlete to develop the unique coping strategies that work best for each individual. A collaborative approach facilitates self-awareness and self-understanding in young athletes and lays the foundation for self-regulation.

Dr. Peter Murphy is a clinical psychologist with an adult, adolescent and family practice in Tarzana, California. He also provides mental game coaching in association with Dr. Joseph Parent of Zen Golf. He can be reached at dr.m59@hotmail.com