Just for Kicks, Aim Away on new QuickSands Par-3 Course at Gamble Sands in Washington

Home/Uncategorized/Just for Kicks, Aim Away on new QuickSands Par-3 Course at Gamble Sands in Washington

Just for Kicks, Aim Away on new QuickSands Par-3 Course at Gamble Sands in Washington 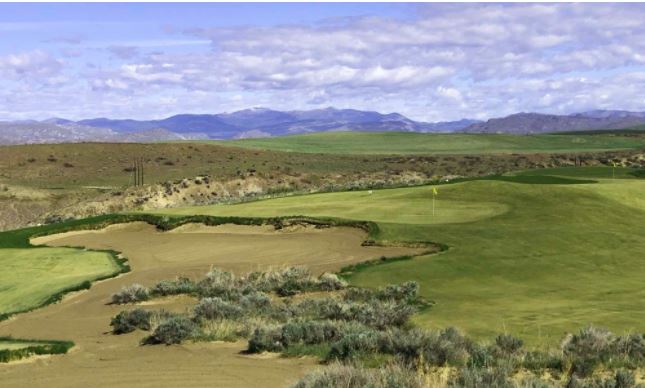 BREWSTER, Wash. – Forget watching big drives soar beyond sight. Forget seeing a putt find the bottom of the cup. And forget turning a cold eye as an opponent stubs a chip in a tight match (forgive me for pointing out this one, as I’m usually on the other side of that scenario). All those things might be enjoyable, but there is something better.

The most fun in golf might be watching an approach shot land on a greenside slope, reverse course and gather speed to trickle onto the green, always rolling closer and closer to the hole. Hold your breath, waiting to see where it stops. A rolling, bouncing ball takes the normal seven seconds of excitement as a shot flies through the air and turns it into a much better 30 seconds of “what ifs.”

And that is the whole point of the new QuickSands par-3 course at Gamble Sands in central Washington near the Columbia River. David McLay Kidd laid out the 14-hole short course that opened last week with the hopes that even good players will take the sometimes-counterintuitive approach of aiming away from the hole to get a ball close. All in the pursuit of a few good laughs.

There are steep backstops. Feeder slopes. Funnels through extreme contours. Downhill tee shots begging a player to try a 180-yard putt. All things that might be too dramatic on a full-size 18-hole course – or too much fun when a serious player needs to post a serious score.

“When you’re out on a big course, because of the GHIN (handicapping) system, every golfer that takes the game seriously is going to post a score,” the native Scotsman Kidd said via video chat after the course opened May 1. “So when you build a full-scale golf course and you do crazy things, someone is going to post that score, and they can get irritated with the fact you’re doing crazy s—. On a par-3 course, nobody is posting a score. Nobody cares, right? … The whole point of it is, it’s not so serious. How do we absolutely max that out?”

It’s all in keeping with a new approach by Kidd that was manifested in the big 18 at Gamble Sands, which opened seven years ago and is ranked by Golfweek’s Best as the No. 1 public-access course in Washington and No. 40 among all Modern Courses built in the United States since 1960. Kidd also has laid out a second full-size 18 that is waiting to be built as the resort, set near expansive apple and cherry orchards, expands.

The whole property exudes a relaxed vibe, building on Kidd’s insistence that instead of punishing errant shots on the main 18, the big idea should be the pursuit of fun. Kidd was coming off a string of designing several difficult courses that were panned by many critics, so the designer changed tacts and tackled the task of making a course playable for average golfers. Gentle slopes frequently steer the ball toward safety, and wide fairways give any player the chance to swing without fear.

QuickSands, with its firm fescue turf that keeps balls rolling across the 25-acre site, amplifies that approach. It’s a major addition to a trend of short par-3 courses at famous destinations that invite players to take a break from typical golf.

Built into what was a wild dip among impressive mountain scenery, QuickSands’ 14 holes play from 60 to 180 yards. The longest, the eighth, plays steeply downhill and begs players to give the putter a whack off the tee. In my foursome at the opening, the best shot came with a flat stick, while another player who tried to loft a hybrid down the slope managed to knock a ball 30 yards right and over a pasture fence. The hole was named Faith, and take it on faith that a tee shot with a putter can work out.

“Our deepest desire when building QuickSands was getting people to figure out that hitting it directly at the pin is not the only option and may not be even close to the best option,” said Kidd, who might be most famous for his original 18 at Bandon Dunes Golf Resort in Oregon. “A basketball got rolled around out there a lot to figure out how we could make that happen.

“Really, our motivation was how do we stop someone, or at least make them think twice about, hitting to whatever the yardage is. … I think if people go out there and just hit to the yardage, we’ve probably failed.”

The holes boast names that were not the product of a marketing department but that were assigned to give Kidd’s crew of shapers a better idea of how the hole should play. Right Wing. Left Bank. Doughnut. Corkscrew.

“On the third hole, I said build me a crater (which became the name),” Kidd said. “Think of Crater Lake. I want to throw it into the crater, because the only way that a severely uphill hole gets fun is if there’s no way the ball can roll away. Think about it, every time you build a golf hole up in the air, like a par 3, normally when it hits the top and if you miss, everything ricochets away. So I didn’t want that. How do we prevent that? Easy, just build a crater. If a shot stays in the crater, you’re probably on the green and maybe you got close.”

The opening hole was named Plinko after The Price is Right game in which plastic chips bounce down through a series of pins. The green is built into a giant mound that turns around tee shots that seemingly land too long, sending balls downward onto the green and often straight toward the flag.

“So I explained to the guys on the first hole that I didn’t want anybody to try to hit to the pin, that I wanted them to use the backboard,” Kidd said. “So in the conversation, somebody said, ‘You mean like Plinko?’ ‘Yeah, yeah, just like that.’ And that’s where it started.”

If it all sounds too much like putt-putt and not enough like real golf, just relax. Take a deep breath. Try listening to the tunes piped through speakers around the course, maybe that will help. And you can still aim at the flags if you like – nobody will force you to join the fun. Go ahead and hit it straight at the hole, but know you’re missing the whole point.