Fans can get minute-by-minute updates, expanded video and betting odds, plus access to PGA Professionals in their area

TULSA, Okla. (May 16, 2022) – The 2022 PGA Championship at Southern Hills Country Club in Tulsa, Oklahoma, will feature the PGA of America’s robust multichannel digital suite, interactive platforms and broadcast partners, CBS Sports and ESPN. The immersive experience will allow fans to interact and engage with the PGA Championship (May 19-22) through access to real-time scoring, video, updates and coaching from PGA Professionals.
PGAChampionship.com Website, App & Social Media
The PGA Championship’s official website and app will provide comprehensive coverage, featuring an interactive user experience, live leaderboard, scorecards and editorial. By clicking a player’s scorecard, users will get shot trails and scoring data, along with access to more than 1,000 automated, real-time video clips showing all the player’s shots or his best shots of the round.
Included in the 156-player field coverage, fans will meet the #TeamOf20 PGA Club Professionals playing in the PGA Championship. Fans can see stories of each player in their home setting, where they work and coach. An integrated “Meet My Coach” leaderboard feature will geo-locate each user and direct them to a PGA Professional in their area to help them with their golf journey. This feature connects directly to the PGA’s mission of growing the game through the nearly 28,000 PGA Professionals nationwide.

Betting odds will be integrated into the PGA Championship’s digital product suite, allowing look-ahead chances for players to make the cut, finish in the top 10 or win. This new integration will provide instant analysis for fans.

On social media, fans will be able to find robust content such as highlights, video and minute-by-minute updates across Twitter, Facebook and Instagram. The PGA’s investment and depth of content continues to grow, providing fans with graphical, text and video highlights, while an expanded video strategy provides recaps and social-first content on all respective platforms.

“Each of these digital features enhances the fan experience for the PGA Championship, and it gives them instant and direct access to our nearly 28,000 PGA Professionals,” said PGA President Jim Richerson, General Manager of The Riviera Country Club in Pacific Palisades, California. “While each of these Coaches have the experience and expertise to develop some of the world’s best players – like those in the PGA Championship field – they also have the knowledge and understanding to help all golfers learn and enjoy the game more. That is why we believe it’s important to provide this kind of programming for fans as a unique way to expand the game’s reach.”

Iconic Insights Powered by Cadillac Coaching Content Series
Iconic Insights Powered by Cadillac is a fun and informative content series that breaks down the world-class play of PGA Championship competitors into consumable coaching tips. Driven by the expertise of PGA Coaches, and shot and produced on-site at Southern Hills, the series will be housed in the Iconic Insights Hub on PGA.com and major social media channels.
PGA Championship Fantasy
The PGA Championship Fantasy game enables fans to pick a four-player roster to earn points and compete against friends in private groups or against all users. Built by SharpLink Gaming, users can swap out golfers who don’t make the cut so they can continue earning points to determine ranking and eligibility for prizes. The game will feature betting odds that show each golfer’s chances of winning the Championship and making the cut. Free to play and easy to enter, users can access PGA Championship Fantasy on the web and mobile via the “Fantasy” tab on PGAChampionship.com. Picks must be in before play starts.

“We’ve been pioneering fantasy sports gaming experiences for professional leagues, teams and sports media operators for nearly two decades, but this is our first PGA Championship, marking another notable achievement for SharpLink,” said Rob Phythian, Co-Founder and CEO of SharpLink. “We’re proud to partner with the PGA of America and enhance the PGA Championship experience through competitive fantasy sports. This takes user engagement to an entirely new level, promoting great fun and entertainment”

“After the success of the Ryder Cup app, we’re delighted to extend our partnership with The PGA of America to launch the new PGA Championship app,” said Mark Locker, Founder and CEO of Attractions.io. “The PGA Championship is one of the sport’s most anticipated events, and our fan-centric solution will ensure that users on site are immersed in the action and get the most out of the Championship.”

Television and Streaming Coverage
The 2022 PGA Championship will feature wire-to-wire 72-hole coverage via CBS Sports, ESPN, ESPN+ and Paramount+. In the third year of the 11-year agreement between CBS Sports, ESPN and the PGA of America, there will be nearly 250 hours of live coverage across their broadcast, cable and digital assets.

CBS Sports will offer comprehensive coverage of the PGA Championship across all its platforms, including CBS, CBS Sports Network, CBS Sports HQ and CBSSports.com.

ESPN and ESPN+ will present more than 230 hours of live play during the Championship. Fans will get traditional coverage, including first tee-to-last putt coverage on Thursday and Friday, as well as exclusive featured group and featured hole presentations during all four rounds. In addition, ESPN’s signature news and information program SportsCenter will have reports from Southern Hills the entire week.

Newly added for the 2022 PGA Championship, ESPN will debut golf’s version of Monday Night Football’s successful alternate telecast with Peyton and Eli Manning – PGA Championship with Joe Buck & Michael Collins. The complementing broadcast is produced by ESPN in collaboration with Peyton Manning’s Omaha Productions. It will air during all four days of competition and feature an array of guests offering running commentary and conversation. Among the scheduled guests are Peyton and Eli Manning, Troy Aikman, Josh Allen, Charles Barkley, Fred Couples, Jon Hamm and Doris Burke, with more guests to be announced. 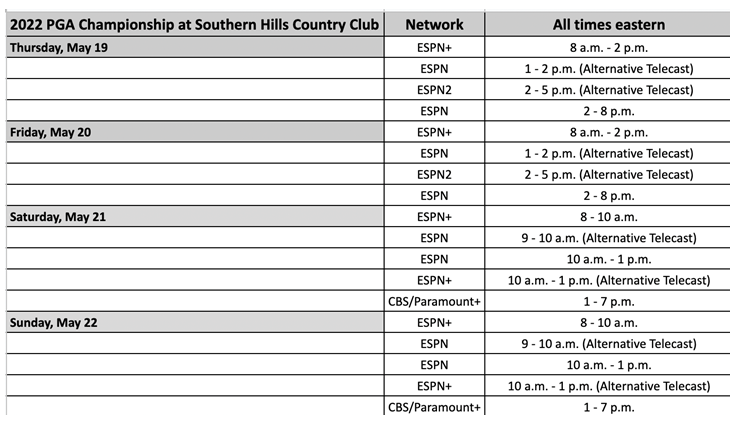