They say kids can’t be happy these days without having video games to play. But that’s definitely not the case with the Mukherjee boys from East Lothian.

“They’ve never been interested in video games, a Nintendo or anything like that,” reported dad Robin. “They’d rather be kicking a ball, throwing a ball or hitting a ball with a stick.”

All three – 16-year-old twins Oliver and Sam and newly-turned 14-year-old Cameron – are particularly keen when it comes to that stick being a golf club and there’s a good chance that you will be hearing a lot about the Mukherjees in years to come.

Cameron, who plays off +0.1, is the current Scottish Boys Under-14s’ Open champion, having become the first home player to land that prize since 2015 with his victory at Kirkcaldy last summer. In another feather in the family’s cap, Oliver and Sam, who are off +5 and +3 respectively, have just been picked to represent Scotland in next month’s Boys Under-16s’ Quadrangular event at Prestatyn next month.

“That’s a nice boost for us,” admitted Oliver, the pair having contributed five points out of six in a Covid-impacted event against Wales at Royal Troon last year and now relishing the chance to take on Ireland and the Netherlands as well this time around.

With the family home located at Craigielaw, golf has always been on their doorstep, but, while dad Robin plays himself, the talented trio’s shared passion for the sport has come mainly from themselves.

“I’m just a very average golfer that loves playing the game,” said Robin, who runs a telecoms business and commercial property firm along with his wife, Angie, while the pair also work together on an investment portfolio.

“When they were young, I’d take the twins down to the par-3 course at Craigielaw in their double buggy and let them chip and putt. I was very much of the mindset of letting them enjoy themselves and, as a result of them hitting a ball around when they were young, they just got the bug. All the credit goes to them as they have worked so hard at it. They just love playing golf.”

Like lots of other youngsters in Edinburgh and the Lothians, the Mukherjees have blossomed in the sport through opportunities provided by the Stephen Gallacher Foundation, which was set up by the four-time European Tour winner a decade ago.

“It has been great for us, especially when we were just starting out,” admitted Cameron, who was the quickest of the trio to get down to scratch, having achieved the feat a year and a half ahead of his siblings. “It was great to get competitive golf week in, week out as that has provided lots of experience. The way they run it is also brilliant, especially as everyone is so friendly, including Stevie himself.”

While Gallacher won’t mind, his wasn’t the name mentioned when Oliver was asked who was effectively the golfing role model in the Mukherjee house. “We’re quite close with Rafa Cabrera Bello, having made friends with him about five years ago at a tournament in America,” he said of the 2017 Scottish Open champion.

“It grew arms and legs from there and, when we were out in Dubai in January, we were able to play with him. We have been able to learn a lot from his game by picking his brains.

“Viktor Hovland is a good guy to look up to as well as he’s gone through the US college system and really hit the ground since turning pro. We met him out in America and he told us that he just wanted to keep getting better.”

While all three are currently at Loretto School in Musselburgh, the US college scene is on the horizon for both Oliver and Sam. “We were out in the States recently doing a tour of the colleges,” revealed Sam. “Most people do two or three, but we talked to the coaches at 15, which was really interesting. 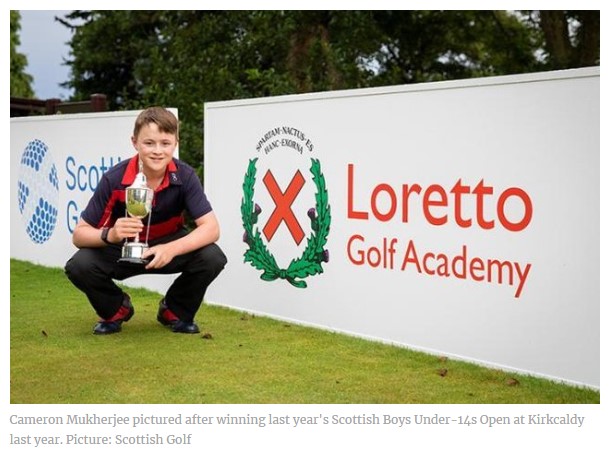 “The goal is for me and Oli to go together. That is the preference, but we are obviously open to being apart. I feel like we really bring each other on and really help each other. I feel as though we would help whatever programme we go to.”

In addition to Craigielaw, the boys are also members of Gullane. They’ve benefitted as well from playing on the Scottish Junior Tour, results on which prompted a Dubai-based Indian golf writer to get in touch with this correspondent last year to enquire about their descendancy.

“My dad is Indian and my mum is Scottish,” reported Robin. “My dad came over in 1959 on a boat and he was an orthopedic surgeon. He fixed a lot of knees for footballers – that was his speciality. He was also the doctor for Hamilton Accies when we lived in Glasgow.”

As well as the coaching they receive through the excellent Golf Academy at Loretto, the brothers also work with Spencer Henderson, the Scottish national junior coach, and Fintan Bonner, an Irishman who is the senior instructor at St Andrews Links Golf Academy.

“Spencer is always encouraging the boys and Fintan is like a big brother to them,” added dad. “He’s on our whatsapp group every day and he has really transformed them from being decent golfers to getting to plus handicaps.”

They’ve achieved that at the same time as learning how to make their own way in the world. “The boys have never been able to have a ‘normal’ job due to their golf schedules so they’ve run their own businesses,” revealed Robin.

“They’ve done food and drinks over the wall to golfers at Craigielaw in the past and presently are doing laundry to earn money to buy their kit/clubs and pay entry fees etc.”

No video games and being taught about old-fashioned values. How refreshing.