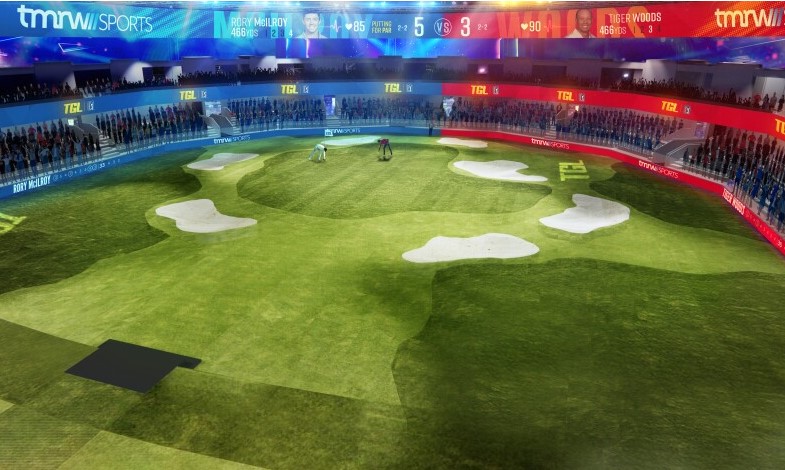 Who knew on Sept. 21, 1970, that Monday Night Football would become one of sports television’s biggest events? Newly announced TMRW Sports can hope its first venture is equally as successful.

One day after Tiger Woods, Rory McIlroy and sports industry executive Mike McCarley announced the formation of TMRW Sports, the company unveiled plans for TGL, a series of Monday night matches that will begin in 2024.

Two three-player teams comprised of PGA Tour players will square off in 18-hole matches that will feature shots into a screen — similar to a golf simulator — and real short-game shots in an enclosed stadium complex and in front of live fans. Matches are expected to be two hours in length.

“For the fans, think sitting courtside at an NBA game,” said McCarley at Wednesday’s press conference. “It’s that type of environment, music, player introductions. You’re right on top of the action as a fan. You see everything play out in front of you.”

TGL will partner with the PGA Tour, which has been attempting to stave off the upstart LIV Golf. While no television or streaming partners were announced, McCarley did say that such discussions would begin soon.

The league will begin in January 2024 with six three-player teams. There will be 15 regular-season Monday night matches, followed by semifinals and championship matches.

The new format will be in stark contrast to traditional tour golf that is often four rounds of stroke play contested over a lengthy part of the day. TGL will likely appeal to a new demographic of golfer in much the same way as Topgolf or Drive Shack have established themselves.

“As a big sports fan myself, I’m excited about blending golf with technology and team elements common in other sports,” Woods said via a release. “We all know what it’s like to be in a football stadium or a basketball arena where you can watch every play, every minute of action unfold right in front of you. It’s something that inherently isn’t possible in traditional golf.”