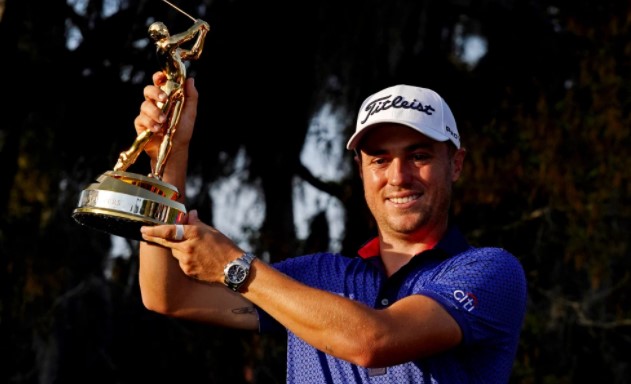 PONTE VEDRA BEACH, Fla. – A dozen years before Justin Thomas won the Players Championship last March, he won the AJGA’s 2009 Wyndham Invitational and earned a berth into the PGA Tour’s Wyndham Championship. All the 15-year-old whipper snapper did that week was shoot an opening-round 65 to make the cut in his debut on golf’s biggest stage.

“I remember leaving there very hungry and wanting to get back,” Thomas recalled. “Looking back, it was a great learning experience for me. I drew back on that the next couple of years.”

had played in the Junior Players, which was first contested in 2007. It won’t be long before a Junior Players champ wins the big-boy version. That’s why the time has come for the PGA Tour to recognize its new blood waiting in the wings and offer a spot to the winner of the AJGA’s Junior Players.

Before they haul me off to Crazy Town, hear me out.

Since 2007, it has been tradition for the winner of the Players to tee it up during the first two rounds with the winner of the Senior Players. That isn’t happening this year because Senior Players winner Steve Stricker has been sidelined since being the winning captain of the Ryder Cup. (He’s recovering from pericarditis, a heart inflammation illness that nearly took his life in January.)

The Players: How to watch | PGA Tour Live on ESPN+

“Wow,” James said. “That would be the coolest. Every kid on the planet would want to play in this event.”

Then I asked them what if the Junior Players winner got to play in the Players?

The U.S. Junior Amateur Championship, which dates to 1948 and includes Tiger Woods winning three times in a row and Jordan Spieth claiming the title twice, always has been the premier event in the world of junior golf. Beginning in 2020, the winner of the Junior has earned an exemption into the U.S. Open. That’s a pretty big deal. If the PGA Tour wants the Junior Players to be considered best of class, it really needs to keep up with the Jones’s.

Part of what makes the Masters special is how it celebrates amateur champions. The first time most golf fans saw Tiger, Phil and Bryson on the big stage was playing Augusta National as the U.S. Amateur winner. Our first exposure to Japan’s Hideki Matsuyama, the reigning Masters champ, was playing at Augusta as the two-time winner of the Asian Amateur. In short, one junior isn’t going to weaken the Players from boasting to be “golf’s strongest field.”

This week, 32 players in the field of 144 had played in the Junior Players. In all, 45 pros have played in both the Junior Players and Players. Bud Cauley was the first to do so. Then, Jordan and Justin and all the other young studs who have been cleaning up in the big leagues, including four of the top 5 and nine of the top 20 in the world.

Course set up is the same at the Junior Players – same tees, same hole locations. The average winning score with the pro setup is 6 under (for 54 holes). Sure, it will be a different pressure in March and they might miss the cut, but last I checked the Senior Players champ hasn’t exactly been channeling Phil Mickelson at Kiawah vibes at the Players: Loren Roberts in 2008 and Fred Couples in 2012 skipped it altogether and Mark O’Meara in 2011, who finished 74th, is the only one to make the cut.

Personally, I like the symmetry of the Senior, Junior and Players champ teeing it up, but given how precious every spot in the field is I’d settle for subbing out the Senior Players winner with the Junior Players champ. What a cool introduction for a young golfer to dream about.

I called up Billy Dettlaff, the visionary behind the Junior Players, who loved my idea but delivered a dose of reality.

“It would be a real longshot,” said Dettlaff, TPC network’s national director of golf who was based at TPC Sawgrass until he retired in 2009. “How does the Tour explain that it’s taking a spot away from a pro who feels he deserves it?”

“Never in a million years” another former Tour executive told me. Best case scenario: a spot in a Tour opposite-field event.

I asked Thomas, who hosts his own AJGA event in his native Louisville, Kentucky, and he said he was neither for it or against it and explained why it may be a tough sell.

“You can’t win,” he said. “On the one hand, it would be huge. To have the opportunity would be nuts. But that first alternate wouldn’t be very happy. It’s the type of event that could change a life. We have a lot of members who aren’t in the tournament, which is tough if you are going to let a junior in. But at the same time, it’s one person.”

I bumped into Players tournament director Jared Rice at a pro-am and asked for the official on-the-record word.

“It’s an interesting idea. I’m always open to suggestions,” he began. Then came the but.

“But based on what we are and what we are building to be, what makes the Players so special and why it stands on its own is how hard it is to get in. It’s about having 144 of the best players in the world and I see the eligibility staying the same for now.”

Not surprisingly, the AJGA happens to share my vision that having one amateur in the field wouldn’t diminish the tournament. Rather, the next evolution for the Junior Players and the Players should be to recognize a star of tomorrow. When I asked AJGA executive director Stephen Hamblin whether he may petition for such an exemption, he said, “I’m not afraid of a no. I get no a million times.”

Hamblin thinks he might even have an ace in the hole in PGA Tour Commissioner Jay Monahan, who signed off on the creation of the Junior Presidents Cup.

“It fell on deaf ears before,” Hamblin said.

It all comes down to whether the PGA Tour wants the Junior Players to be considered one of the major championships for junior golf or if fifth-major status is as good as it gets. I vote for making it so every kid on the planet wants to play here.